I don’t have an extensive blog post to share with you today. However, I know you’ve been asking for photos, so I did pull together some of my favorite snaps and a few notes from my time here thus far. Enjoy! 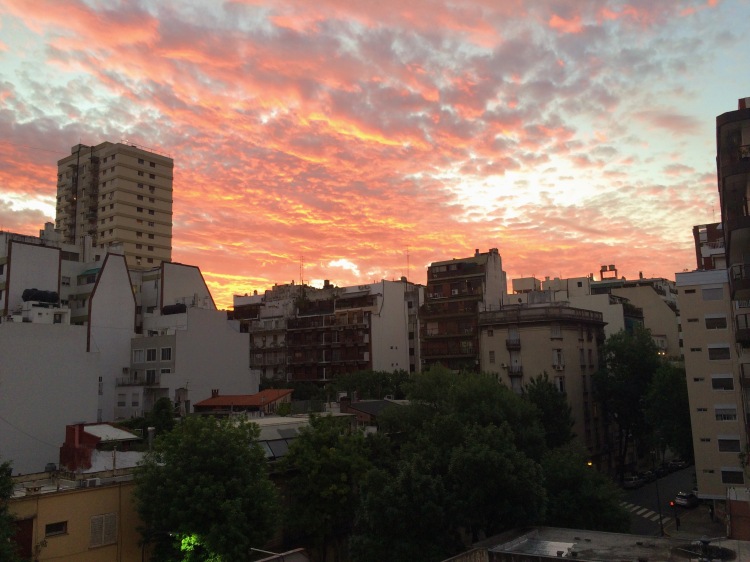 I took this photo during my first week here from the living room of my Airbnb in Barrio Norte. 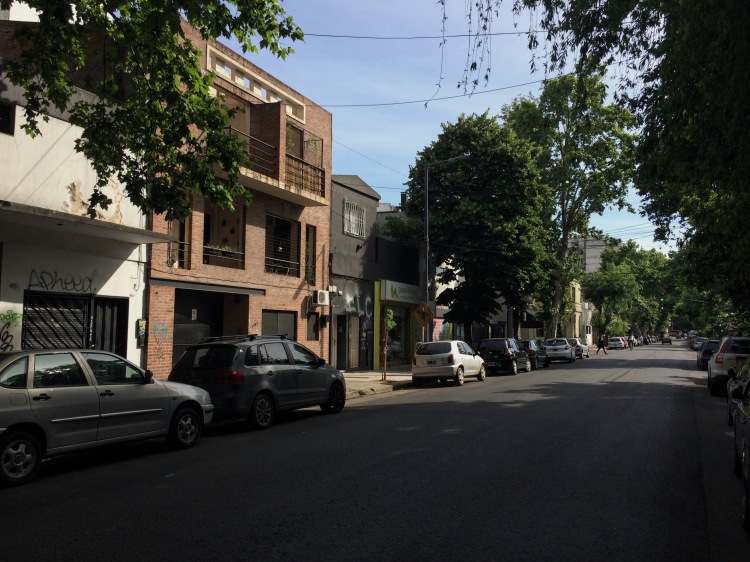 This is the street I’m currently living on. My apartment is one of six in the red-brick building. I’m really enjoying living in and exploring Palermo Soho; the variety of cafes and restaurants; and the color and diversity of the buildings. As I’m getting familiar with the streets and this area, it’s fun to choose different routes when going somewhere — and take in new views every time I turn a new corner. 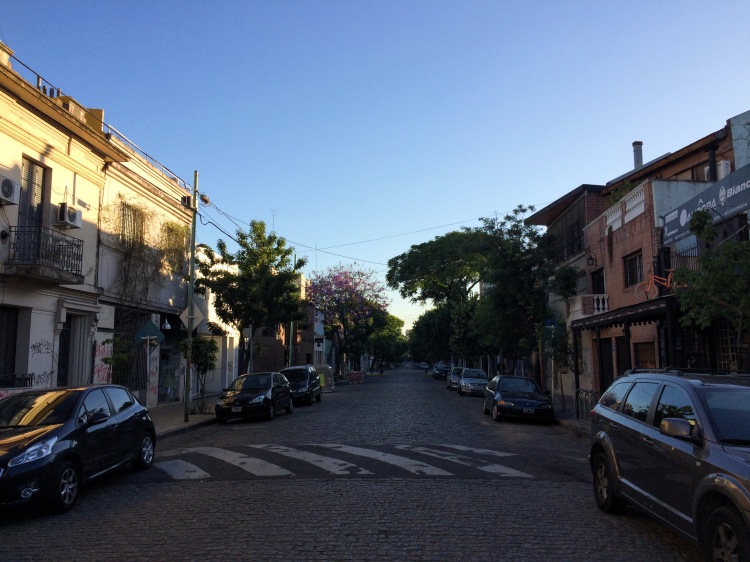 I started Spanish classes on Tuesday. I got up around 6:00 and left my place at 6:30 to walk to my 7 o’clock class. Since summer is upon us, we’re getting quite a bit of daylight in Buenos Aires right now. As I walked through the quiet streets of Palermo Soho, I took this photo of the morning light down a street.

Last Sunday, I went on a full-day guided bike tour with Biking Buenos Aires. Nearly all the neighborhoods we visited were ones I hadn’t been to yet. It was such a great introduction to the city — its neighborhoods, history and culture.

One of the stops on our tour was this mural in La Boca. The mural was completed in 2011 and honors the mothers and grandmothers of the people who were “disappeared” during a period of political violence in the 1970s and 1980s. A bit more on the Mothers of Plaza de Mayo here.

The story of this point in time was one of many about Argentina’s history that just blew me away. What is so interesting to me is not only that this happened but that it happened so recently. This photo doesn’t capture the full mural; part of it also lists the names of those who went missing from this particular neighborhood during that time. Our guide told us that most neighborhoods have murals like this that honor the mothers and grandmothers and commemorate those who were “disappeared” in the 70s and 80s. 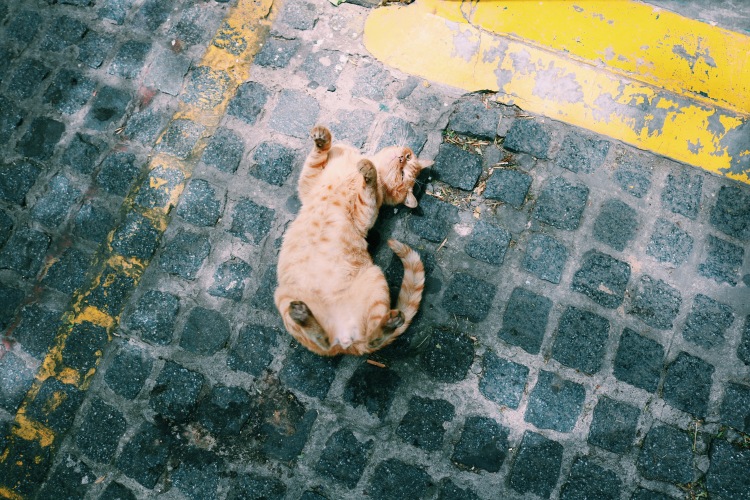 This post wouldn’t be complete without a photo of a cat, so you here go. I gained a friendly feline pal in La Boca. He was incredibly affectionate, and I was happy to get a little kitty lovin’ in. I miss my LBK.

Puente de la Mujer, or Women’s Bridge, is a rotating footbridge in Puerto Madero. The architect who sold it to Buenos Aires said he’d made it special for the city as the swinging motion of the bridge resembles a common tango move in which the dancer’s leg sweeps across the floor. Our guide told us the architect was a good salesman as he sold this same design to several other cities — including Redding, California; Monterrey, Mexico; and Dublin, Ireland.

During the bike tour, I was also treated to my first taste of mate — the national drink of Argentina that resembles tea. It’s much more bitter than tea, but I quite liked it. It’s also quite opposite tea in that there’s a special straw that acts as a sieve, keeping the leaves out of the hot water as you drink it. Best with sweet crackers or cookies. 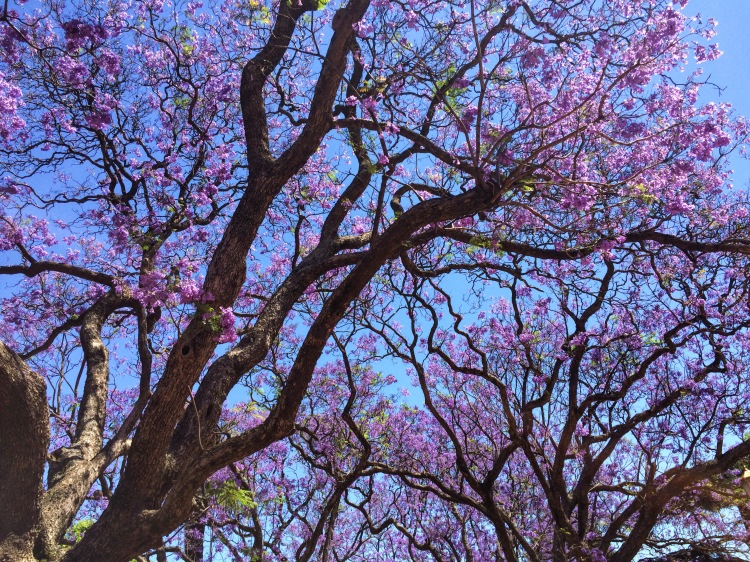 I arrived in Buenos Aires at the right time. As we transition from spring to summer, the jacaranda trees are in full bloom all over the city. They feel like something out of the illustrations in a children’s book — a touch of beauty, magic and whimsy. It’s easy to get lost in thought around them.

Yesterday, I took the train to Tigre, a town that lies along the river north of Buenos Aires. It rained heavily yesterday — more on that and my day trip in a future post — but it was nice to escape the city for the afternoon and see a different part of Argentina. There are so many cities and regions in this massive country that each have something special to offer. I’m looking forward to exploring more of them.

In Tigre, I got lunch along a canal. I spent time reading my book, watching the stillness of the gray day from inside and soaking in the sound of the rain. Having spent the past three years in California — where rainstorms are few and far between and massive thunderstorms are unheard of — this was a treat for me. It was a peaceful afternoon. At the restaurant, I really liked the lights that lined the roof. They gave this otherwise gray day a bit more color.

That’s all for today. Next step is getting a few photos with me in them!

Hey there! Want to stay in touch? Cool — me, too! Share your email to get my latest blog posts and updates sent straight to your inbox. Subscribe now.